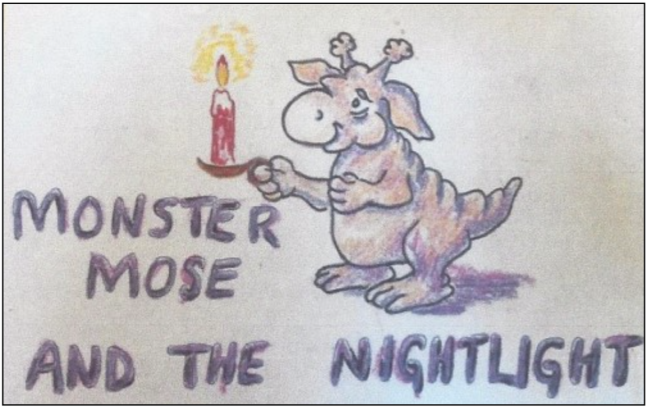 My good friend George, who was in town last week, told me about a poem he wrote and illustrated years ago to help his son handle fears at night. I thought you, and your (grand)kids, might enjoy it.

Well, the lights went out without a peep, and they both snuggled under the covers deep.
The floor was dark and as cold as frost. Mose wanted up, whatever the cost.
As mommy tucked David and Mose into bed, she sang a lullaby.
But David had a bad dream, and he turned and tossed. Poor Mose landed in a heap.
Monster Mose had sleepy in one eye, he stretched and he yawned, and he let out a sigh.
She smiled and whispered it was time to sleep. And God heard the prayers they said.
They both hugged Mommy, and she kissed each head. They mumbled and grumbled they’d rather play instead.
But David didn’t hear him though he yelled and he tugged. Poor Mose knew that he was lost.
So he looked straight up, and—Oh! What a sight! Just outside the window stars were shining bright.
Mose began to cry, he was in such a fright. He needed to be hugged.
And the moon above the treetops was the world’s nightlight. And a thought came to Mose that brought him such delight—
The end zzzzzzz