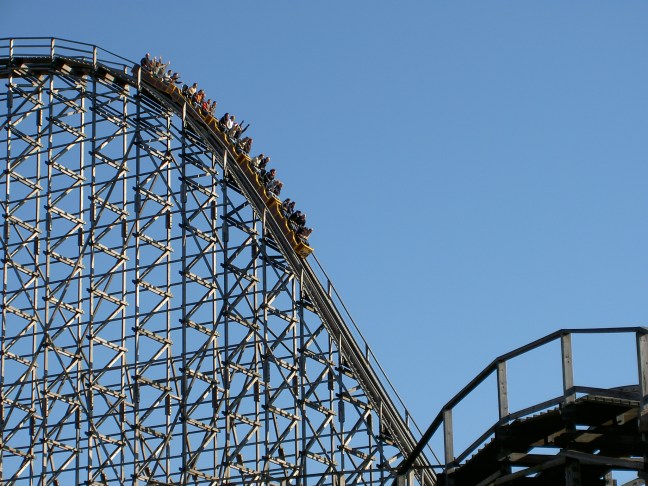 I’m not a big fan of rollercoasters, even figurative ones. Especially when the ups and downs are on rails of cancer. I really wasn’t afraid, but I wasn’t riding with my hands in the air either. I was hanging on tight.

First the eye doctor suggested that since she couldn’t find anything wrong in my eye that explained my recently noticed blurred and double vision, the problem might be behind my eye. I’m not an expert in anatomy, but the only thing I could think of behind my eye is my brain, and the possibility of brain cancer did cross my brain. Fortunately, and gratefully, a blood work-up, an MRI, and exams by three other doctors led to the conclusion that the problem was caused by a wrong lens that had been put in my glasses nearly a year ago!

Then it was time to follow up on a PSA that had gone from 5.5 to 7 in six months. As I noted last week, the biopsy was a piece of cake. The resulting phone call, not so much.
I was told the biopsy had tested positive for cancer, and the doctor wanted me to read a book on prostate cancer before meeting with him for consultation on how to proceed. After hearing the relatively good news that even though the cancer was on both sides of the prostate it was low grade, and having the options explained, I was weighing the pros and cons of surgery or radioactive seeds. I then asked what I hope was a Spirit-led question. I asked him what he would do if he had what I have. His answer stunned me. He said he would do nothing!

I haven’t yet talked with my family doctor, but at this point I think I’ll probably do the same. I will, however, follow up with periodic PSA’s, and if there is a radical change, I’ll obviously reconsider the options.

As I mentioned Sunday, I really do appreciate all the prayers and expressions of concern that have been shown to me. And I do ask that you continue praying, especially for discernment to know how God would have me ride out this rollercoaster.